Our factory is on the outskirts of Twynholm and is signposted from both directions on the A75, as well as from Kirkcudbright.

The factory is visible from the A75 (look for the giant dinosaur). The junction from the A75 is just before Twynholm when heading from Dumfries, westbound.

Take the A755 out of Kirkcudbright over the Tongland Bridge, heading towards Gatehouse of Fleet.  Follow this road for approximately 1 mile then turn right heading towards Twynholm (look out for the brown Chocolate Factory sign). Follow this road for about a mile and a half then at the cross roads take the road straight ahead.  The Cocoabean is the first turn off on the right after this junction.

Follow the A75 westbound in the direction of Stranraer.  Approximately 8 miles from Castle Douglas turn left off the A75 at the yellow sign stating children’s chocolate factory.  Follow the road for about 200m and we are on the left hand side.

Our usual office opening hours are Monday – Friday, 10am – 5pm.

Our opening hours during term time can vary. Please check our Facebook page or booking system before visiting. 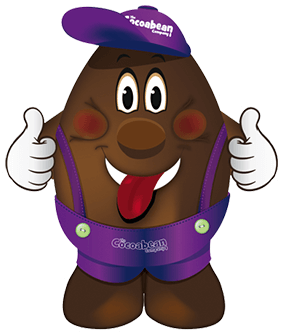 Visit our shop
© Copyright 2023 The Cocoabean Company. Registered in Scotland No. SC285798
Site designed by The Lane Agency